Skip to content
Follow @gilra
Order is a crucial force in life, especially if you are a data analyst. But as we will see today, the misuse of order might cause an unexpected chaos. In today’s post, we will discuss the chaotic nature of column ordering in the Query Editor of Power BI and Power Query / Get & Transform in Excel, and we will learn how to avoid the fourth pitfall of column ordering.

You can follow the Pitfalls series here, and subscribe to DataChant below to get the file sample.

In this article, we will discuss the reordering of columns. We’ll start with the rationale of column reordering (in this section), and will then describe the mistake we do when we are using it (The next section).

Note: To avoid confusion, we will not discuss the sorting of rows by columns, but the rearranging of columns’ positions in the queries and tables.

Reordering of columns is not supported as part of the Data Modeling (PowerPivot), but can be achieved in the data preparation phase in the Query Editor of Power BI and Excel Power Query / Get & Transform.

To reorder columns, you can simply select the columns and drag and drop them to their new position.

Why do we need column reordering?

Unfortunately, in Power BI, you will not maintain the columns’ order in the Fields list. Power BI automatically sorts the fields by alphabetic order.

The only view in Power BI Desktop where you can see the correct column order is the Data view.

Where else can we take advantage of column reordering? Inside the Query Editor to help us to author further steps. For example, when you want to merge multiple columns, or remove duplicates, you may reorder the relevant columns, to ease your multi-column selection.

You can also reorder a custom column for debugging purposes, and see how the calculated values in the new column are affected by values in other columns. 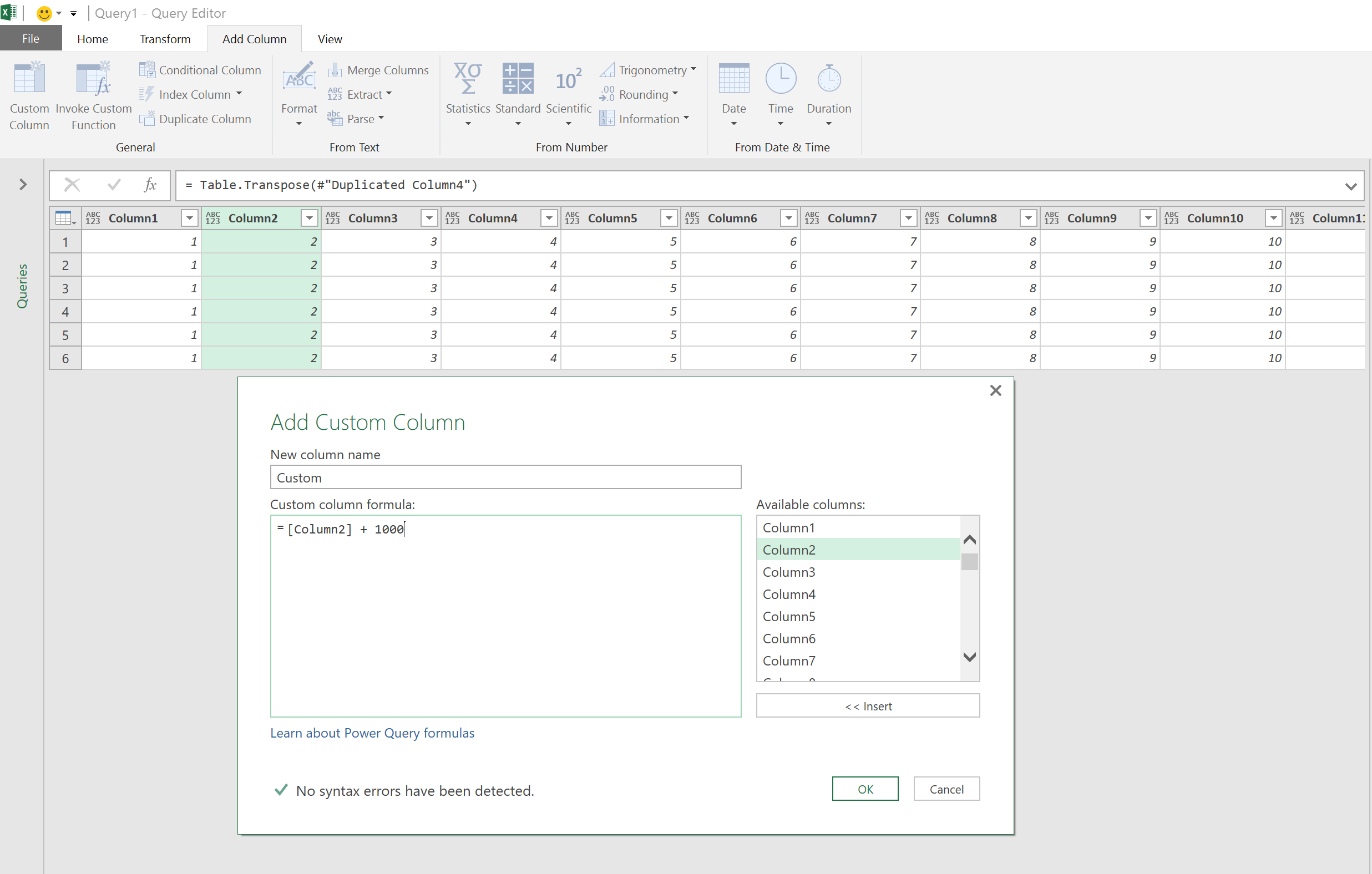 Unfortunately, the new custom column, is always added at the end of the table, which makes it quite challenging to move the new column to the left, if we have dozens of columns. But we always move the custom column to a better location, to help us testing our calculation.

Note: Vote here for this idea: When we add Custom Column, allow us to choose its position.

Trick: If you have hundreds of columns in the preview of the Query Editor, and you want to move the last column to the left side, use the Move > To Beginning in Transform tab.

So now when we know all the great advantages of column reordering in the Query Editor, let’s demonstrate how we always take a big risk when we use it as-is.

Let’s say, we want to reorder the last two columns as the second and third columns.

Following the reordering of the last two columns, Power Query will auto-generate the formula which is needed for the reordering step. If you have the formula bar open (Which you do, if you have avoided Pitfall #1 here), you can now see that formula refers to ALL of the columns names, and this is the pitfall!!!

And the result –  The auto-generated code will fail to refresh.

The example we use here is relatively naive. But let’s continue to use it to illustrate the challenge at hand. So, how can we avoid the pitfall, and create a robust query that will not fail to refresh when the data changes.

We can always avoid the reordering altogether. In our naive case, we can simply select the columns Region, RegionManager and HeadCount (Using the CTRL key, as the columns are not adjacent), and apply Unpivot Other Columns to have a table with the Year and Amount.

Tip for new-comers: If you have years or dates as column names in your tables, you are missing a great potential of insights. Unpivot your table (Here is my unpivot series).

How can we fix the formula below to prevent refresh errors?

Here is the fixed formula that will avoid refresh errors and will ignore column 2013:

Hurray, the refresh didn’t fail. But the reordering ignores column 2017.

On many scenarios, you would prefer to keep having the missing column (especially if you need it in later transformation steps). To keep the missing columns you can use MissingField.UseNull, as shown in this formula:

With MissingField.UseNull we were able to keep column 2013 with null values. Still, the column reordering wasn’t achieved properly (Column 2017 is before 2014).

Could we somehow reorder only a subset of the columns, and keep the remaining columns intact?

Ideally, we would use the following formula to move the specified columns to the start of the table:

But the formula above has no effect on the column order. It remained the same.

Here is another failed attempt to specify a subset of the columns:

You can see that HeadCount remained at the end, with 2014 as the new last column. The fact that we need to refer to column 2014 is not reasonable, given the potential refresh failure.

Here is another failed attempt, which is mainly bad, as we refer to two columns.

While this method can be handy to shuffle between few selected columns, it is useless for moving few columns over a long subset of columns, as we need to refer to all the column names in the code.

Finally, we have reached our best solution, that will allow us gain the following objectives:

By fulfilling the objectives above, the fourth pitfall is avoided.

And here is the solution:

Create a blank query with the code below, and rename the query to FnReorderColumnsSubset. 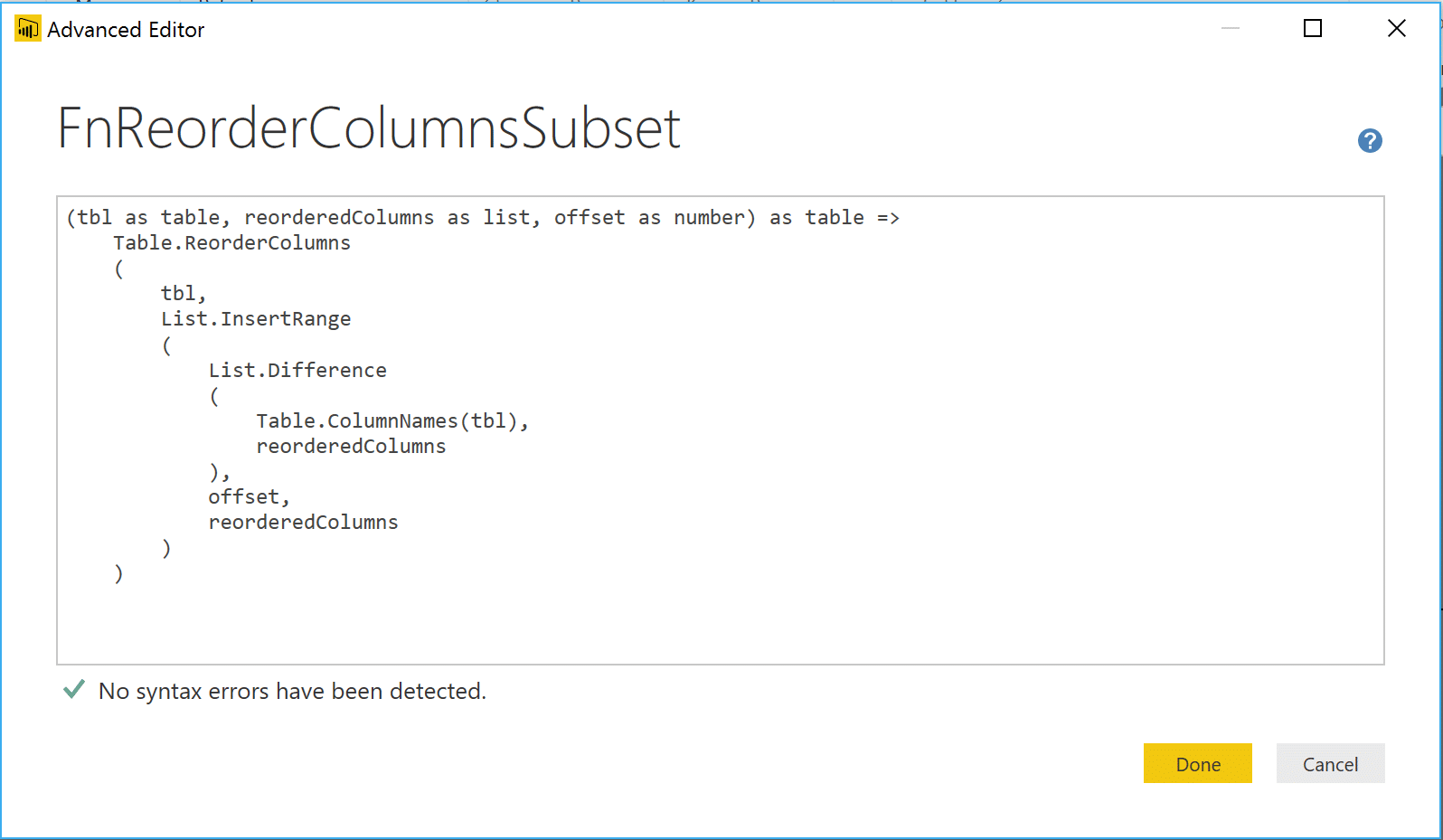 You can copy the code from here, or download the PBIX sample if you are a DataChant subscriber (Subscribe form below).

The function receives the table, a subset list of the ordered column names, and a zero-based offset. The main transformation is Table.ReorderColumns, with a dynamic list of columns that is created using a combo of List.InsertRange and List.Difference.

Here is how you can use it to solve our challenge:

To arrange the first N columns in your table, use this formula, with an offset of zero. In our case we will use Region, RegionManager and HeadCount with offset of zero.

To be more precise, in our example, we could also just arrange RegionManager and HeadCount in after the first column (offset 1):

You can use different offsets to position the specificed ordered columns anywhare in the table. In the example below, I positioned Region, RegionManager and HeadCount in offset 2 (Third column).

Subscribe to DataChant to get Pitfall 4 Sample.PBIX file with the example, and query.