Use DAX and Slicers to define thresholds for Negative & Positive Sentiment

This is the third part of the Sentiment Analysis series. In the first part we learnt how apply Sentiment Analysis in Power BI without any server side code, or help from IT or Data Scientists. In the second part we refined the solution to support large content beyond 1000 messages.

In today’s post, I would like to focus on a different important aspect of our Sentiment Analysis implementation. According to Microsoft here, the “Text Analytics service returns a score between 0 and 1 denoting overall sentiment in the input text. Scores close to 1 indicate positive sentiment, while scores close to 0 indicate negative sentiment.”

This is our main topic for today. We will use DAX and Slicers to give the analyst control in deciding the questions above. Moreover, the techniques we’ll describe today can be generalized and applied on any report where you need to translate numerical values into textual buckets (e.g. Low, Medium, High).

Subscribe to DataChant to get the Power BI Desktop file used in this tutorial.

In this section we will focus on static thresholds that will help us to translate between the decimal number to the Positive, Neutral & Negative sentiment ranks. I use the term “static”, because we will hard-code the ranges of the different sentiment ranks.

For example, we will define the range between 0 to 0.3 to define Negative sentiment; 0.3 to 0.7 to define Neutral sentiment, and 0.7 to 1 to define Positive sentiment (Ignore the equal or greater-than nuances for now, we will handle it later in the DAX formulas).

Our first step in this tutorial is to create a static disconnected table in the Data Model.

Open the Power BI Desktop file that you created in Part 1 or Part 2 of this series.

Add the columns Rank, Min Score and Order with the following rows (as seen in the screenshot below). When you are done, name the table as Sentiment Types and click Edit. 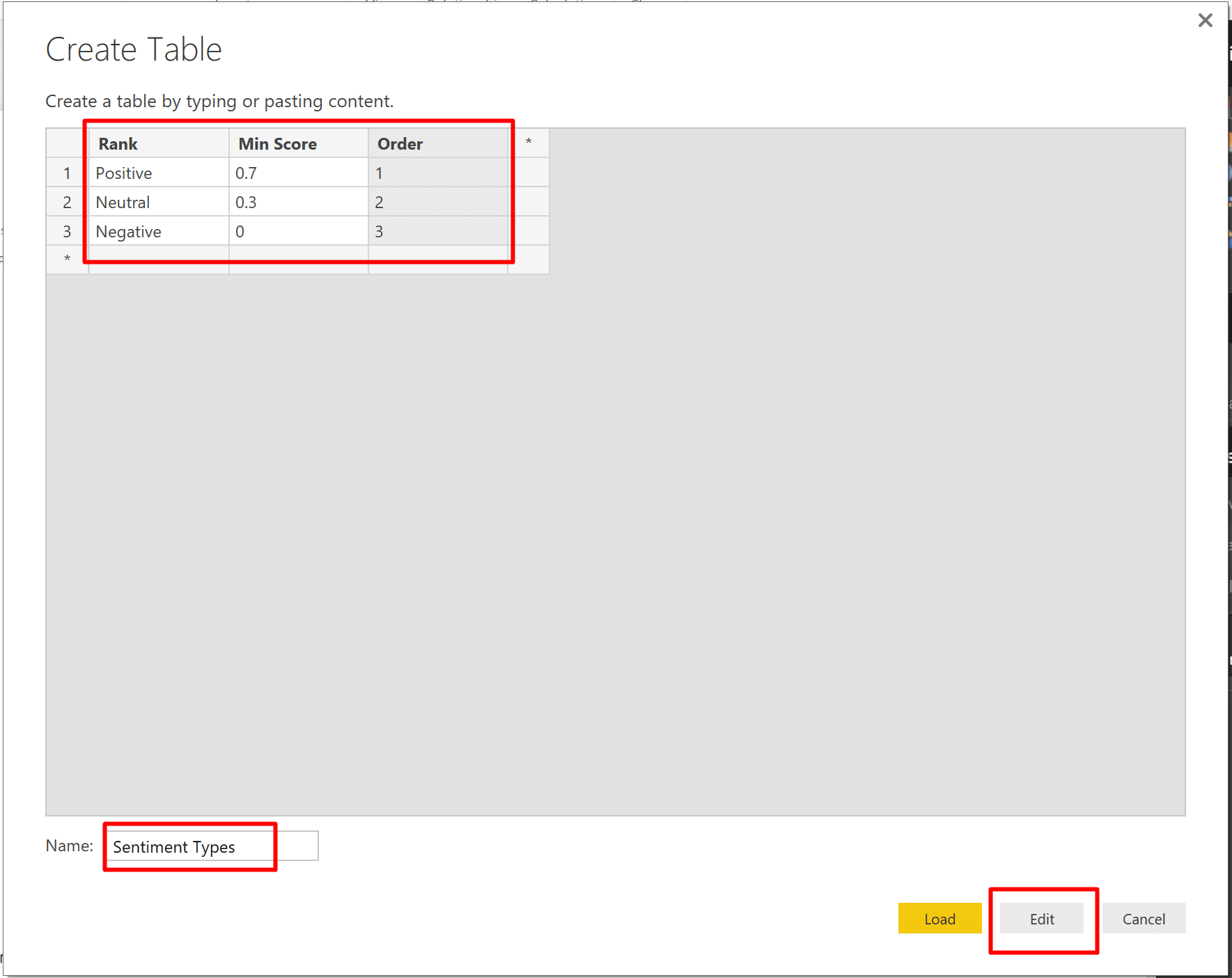 Change the type of Min Score to Decimal Number.

If you are already subscribed to DataChant, and use the Power BI Desktop file that I shared, the query above is already defined in the file Sentiment Analysis Part 3.pbit.

Next step is to create a connected table that will be used as a data source for the Chiclet Slicer. Create a new table with the following content. When you are done click Load (or OK, if you clicked Enter Data from the Query Editor). 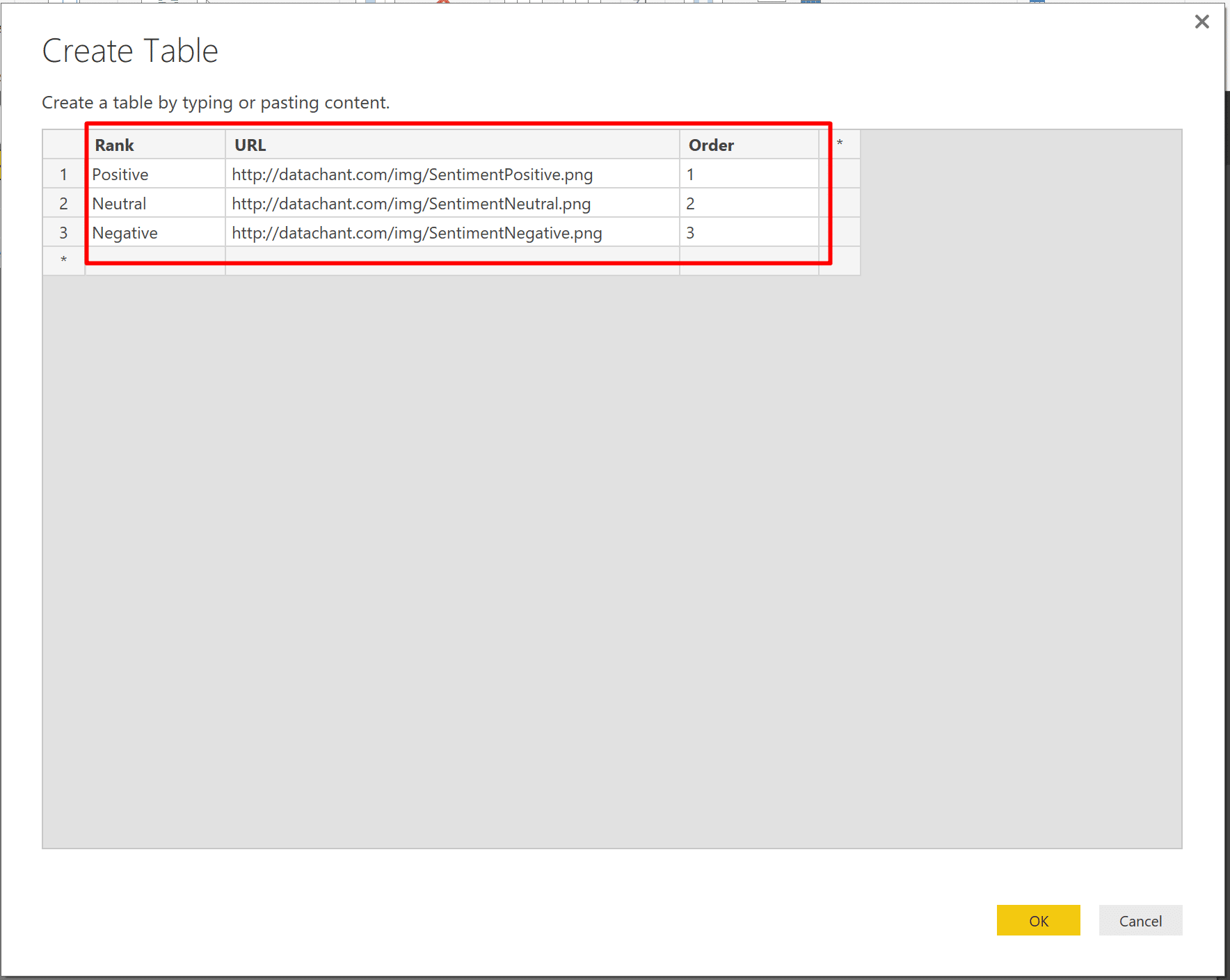 Name the query of the table above as Sentiment Images, and click Close & Apply to load the tables to the report.

Add a measure in the table Sentiment Results to measure the Sentiment average score.

Tip: It sounds trivial, and perhaps unnecessary, as you may be used to drag and drop numerical columns to the Values pane and set them as a calculate average, but explicit measures will make your life easier and your DAX more reusable, so avoid using implicit ones (implicit = you drag and drop a column to Values which triggers an implicit measure by Power Pivot). 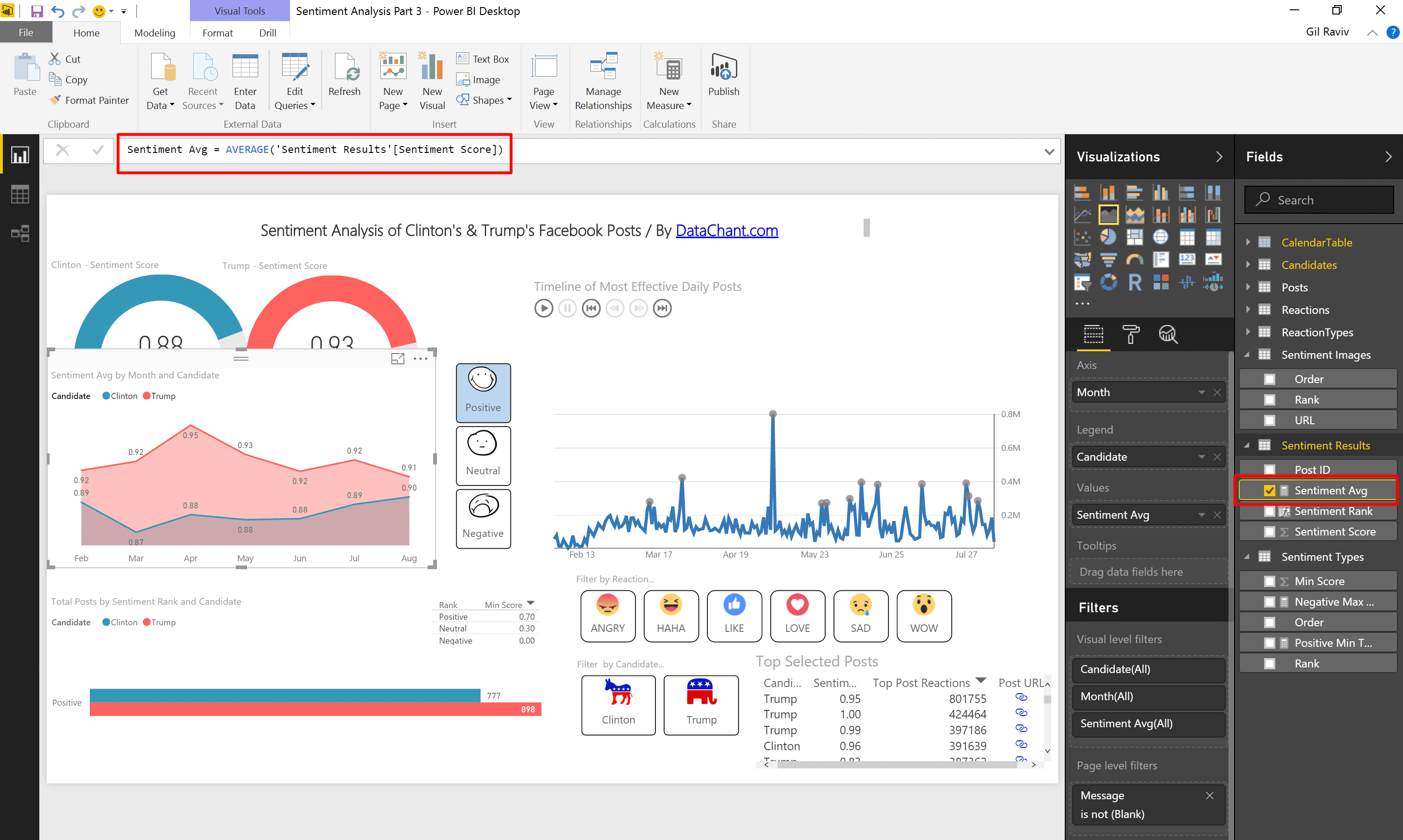 Next, let’s add a measure under Posts to count the number of Posts.

And now let’s focus on the interesting measures – 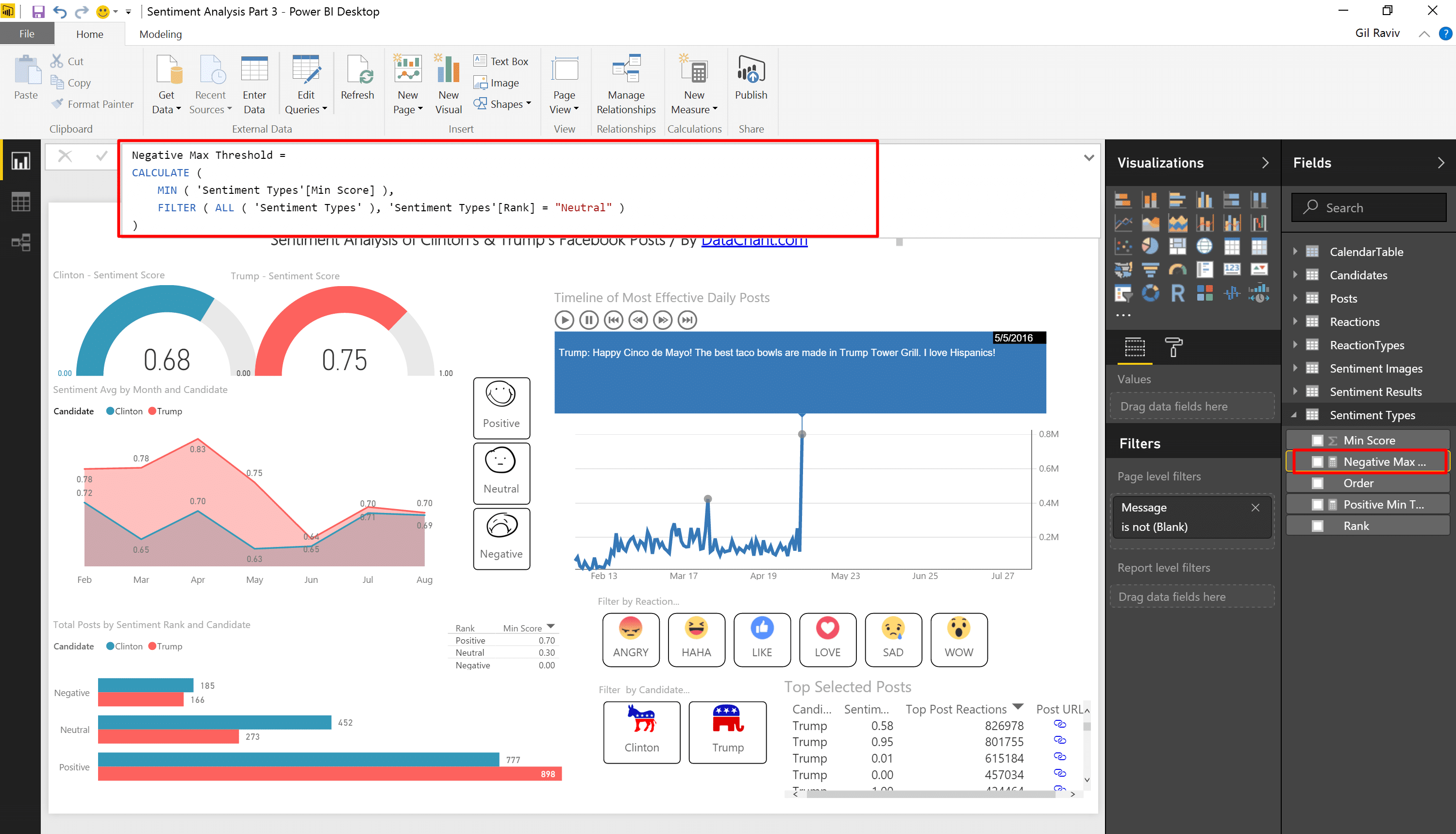 The measures above extract the thresholds 0.3 and 0.7 from the table Sentiment Types.

Next step is to create a Calculated Column (not a measure) in the table Sentiment Results. The new column will contain the sentiment rank. 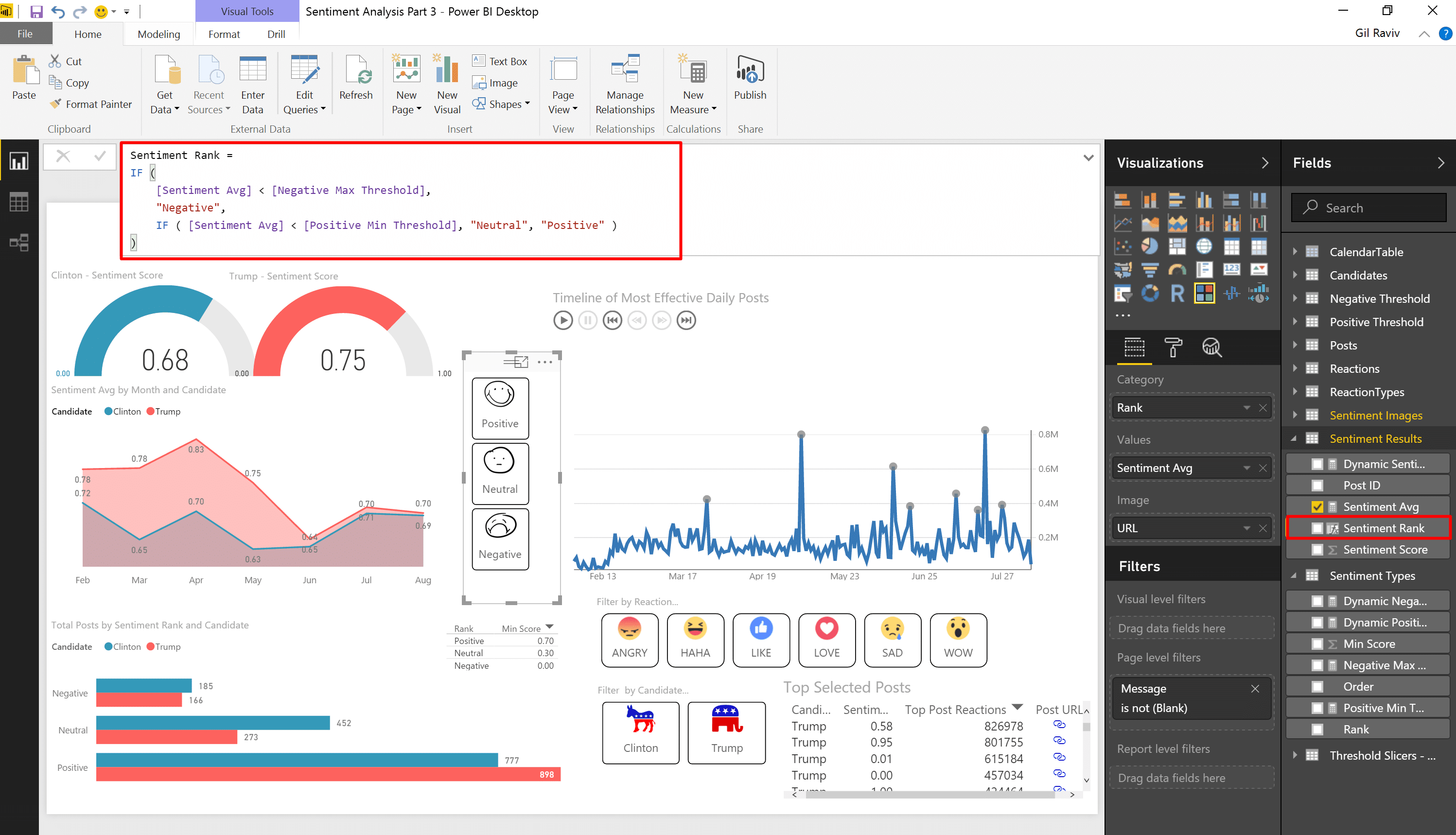 The advantage of the calculated column is clear. We can perform a row level calculation and convert the decimal number in Sentiment Score into its textual rank, as we defined in the table above. 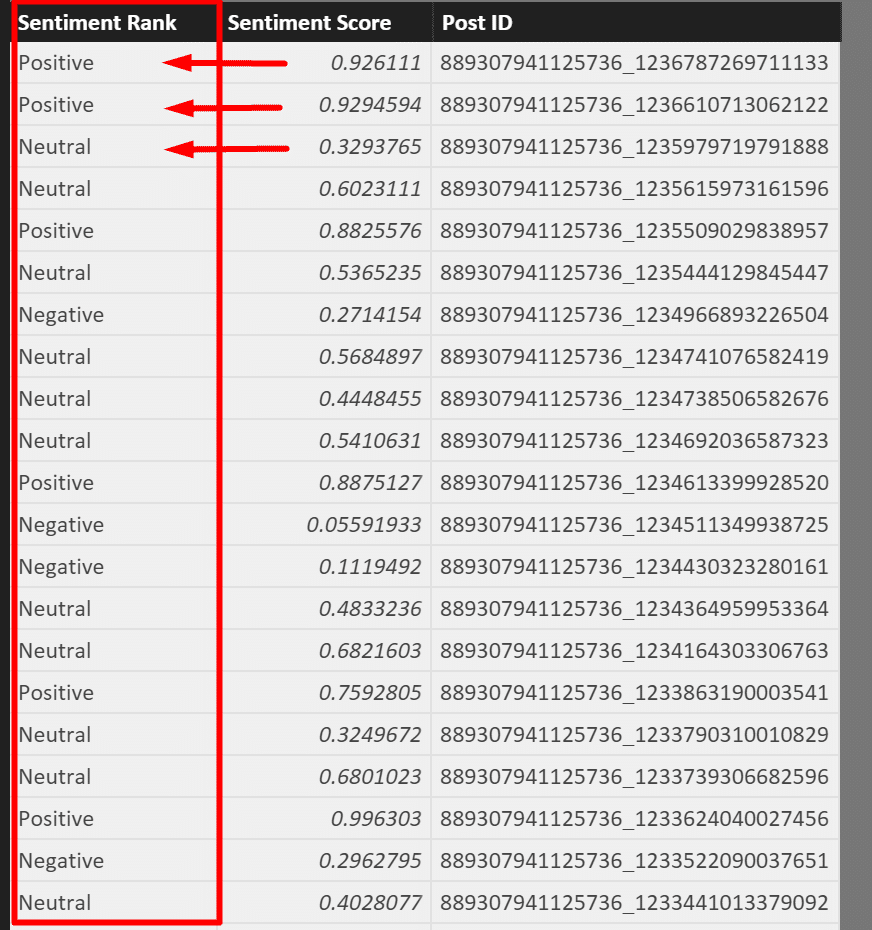 Important Note: Calculated Columns are updated during Refresh. The ranks we applied here, can be updated after you change the thresholds and refresh the Data Model. But calculated columns will not help us in the “dynamic” approach we will describe later on (We don’t want the user to click Refresh every time he changes the threshold).

The next step is to create the correct relationship, and to avoid the wrong ones (A good tip for life, isn’t it?).

If you try to connect Sentiment Types into Sentiment Results, you will get the following error message:

So let’s keep this table disconnected, and instead, create a relationship between Sentiment Images and Sentiment Results. 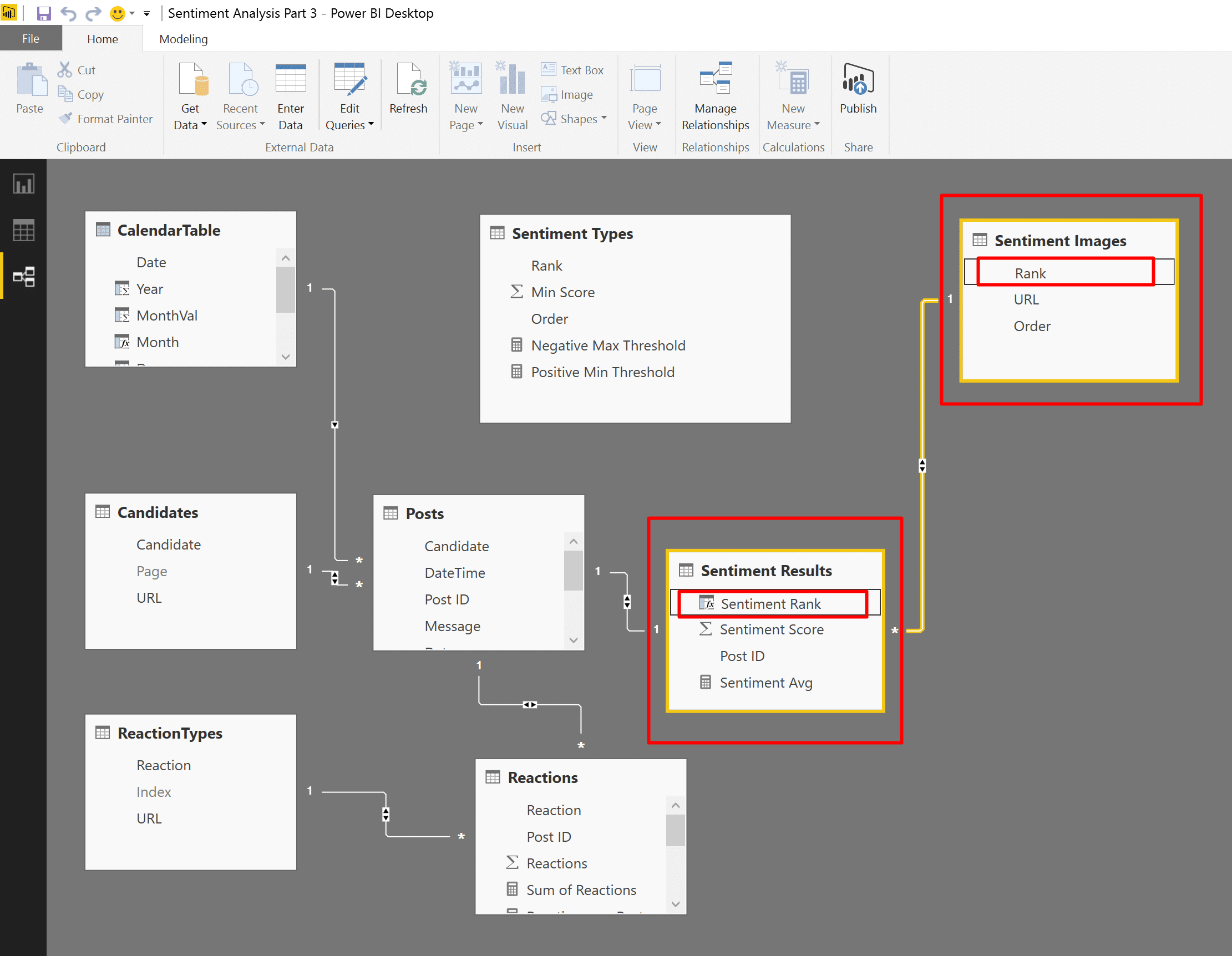 Now we can go back to the Report view, and define a Chiclet Slicer as seen in this screenshot. 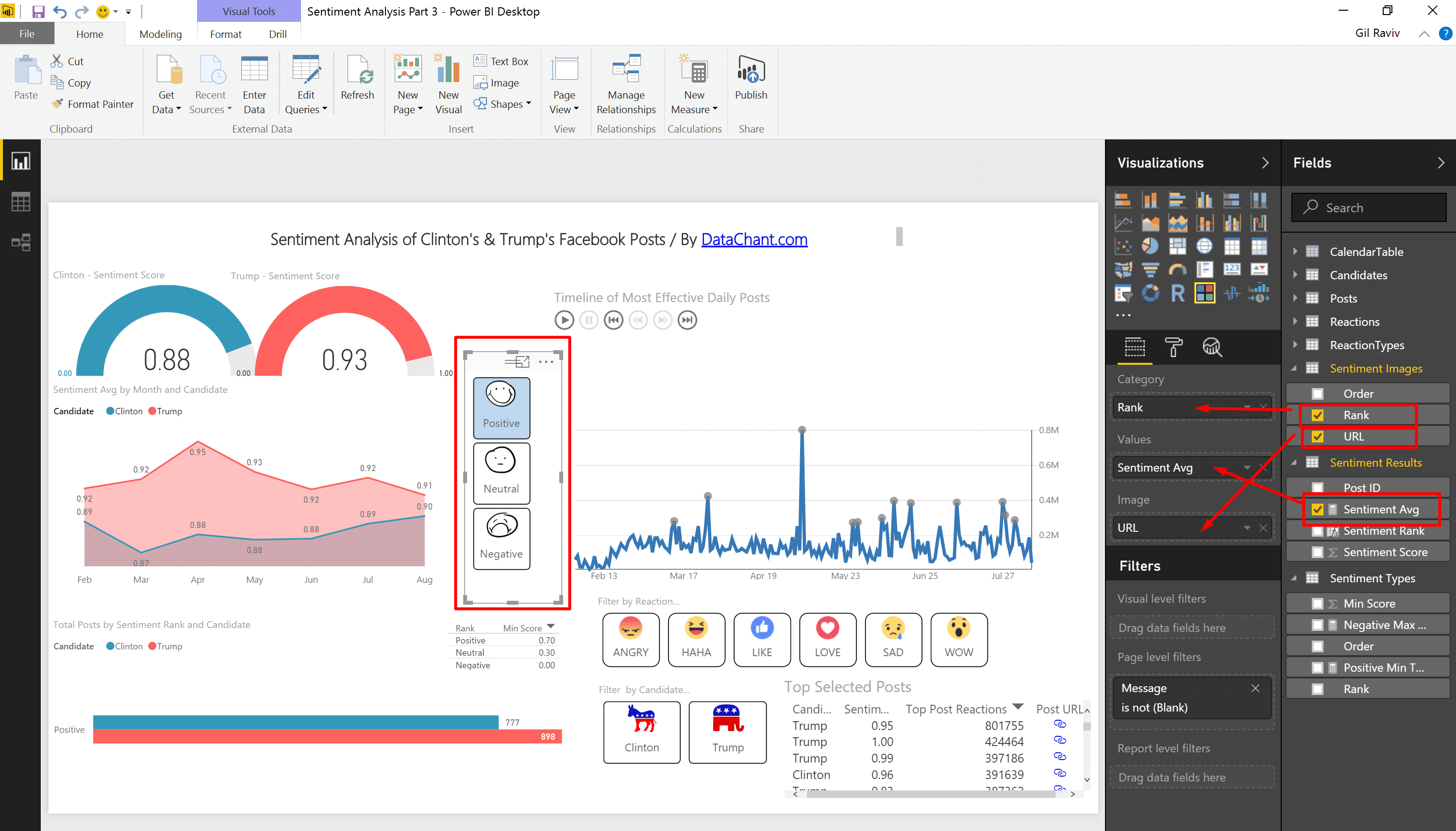 To ensure that our slicer is sorted correctly (and not by alphabetic order), go to Data view, select the column Rank, click Sort By Column and select Order.

In the next step we will build a visual that take benefit of our static thresholds.

We will count the number of posts by Negative, Neutral and Positive sentiment.

Add the Clustered Bar Chart. Drag and drop Candidate column from Candidates table to Legend, Total Posts from Posts to Value and Sentiment Rank to Axis. 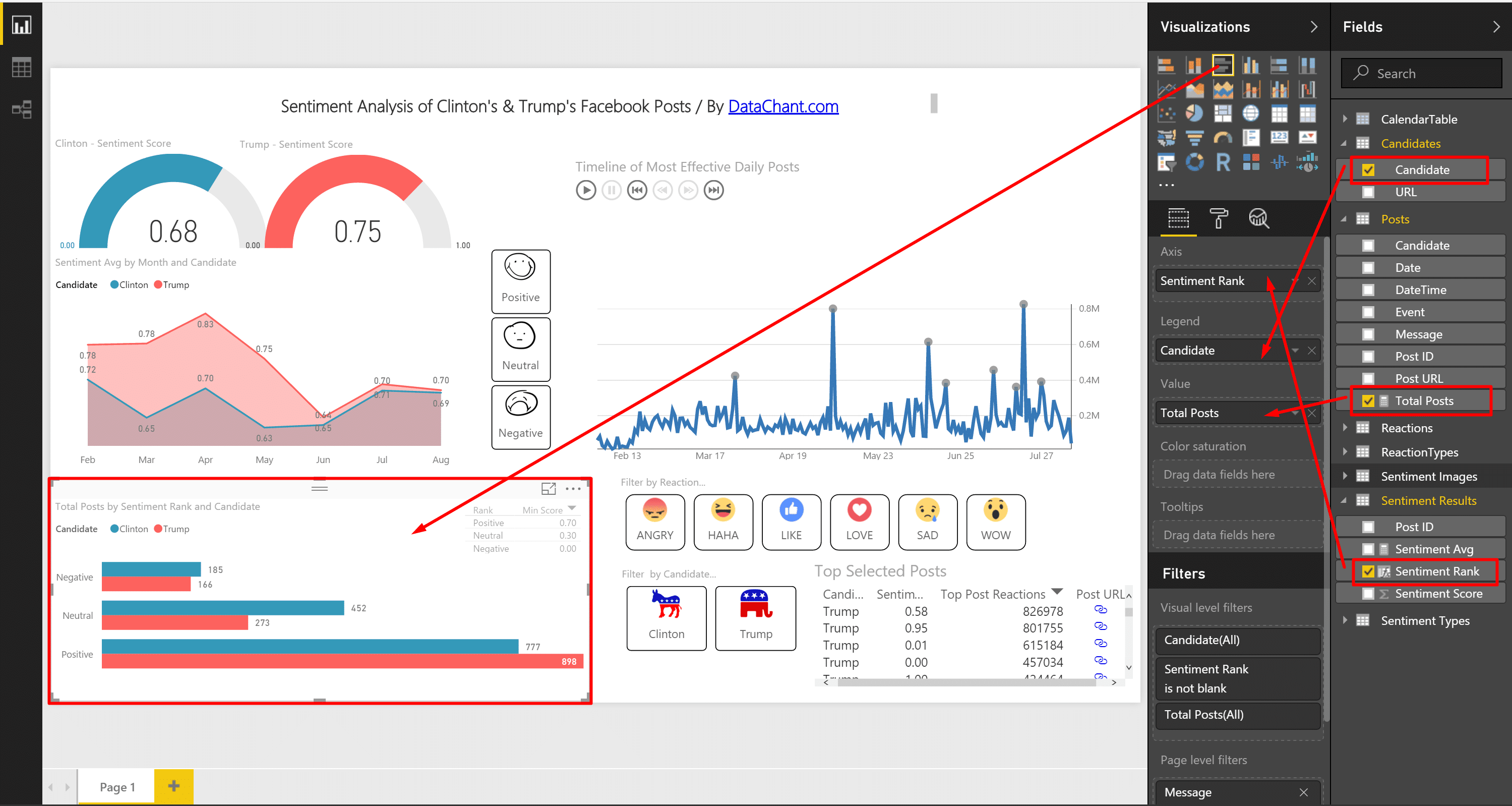 That’s  it. We were able to convert the numerical values between 0 to 1 into textual sentiment ranks, and apply new measures that take the ranks into account. While this approach is relatively straightforward, it has its limitations, and require “hard-coded” update to the thresholds table to change the definition of positive, neutral and negative sentiments. So let’s try a different approach.

Wouldn’t it be awesome if our analyst can use slicers to define the numeric ranges for positive, neutral & negative sentiments?

We will now use DAX and disconnected slicers to dynamically define the thresholds for the three sentiment ranks. You can open this report on Power BI, change the thresholds to the right and see how they affect the results.

We will start by adding two new tables to feed the slicers above.

The first table defines the decimal number options for the threshold between Negative and Neutral sentiments. You can use a blank query with the following Power Query expression (M) statement:

The second table defines the decimal number options for the threshold between Neutral and Positive sentiment. You can use a blank query with the following Power Query expression (M) statement:

The next step is to create the following two measures in the table Sentiment Types:

The measure above reads the maximal number that is selected in the Negative Threshold slicer. If you select 0.2, 0.3 and 0.4. We will take 0.4 as the maximal value which should be used as the threshold between Negative & Neutral.

The measure above reads the minimal number that is selected in the Positive Threshold slicer. If you select 0.9, 0.8 and 0.7. We will take 0.7 as the minimal value which should be used as the threshold between Neutral & Positive.

Now, we will create a 100% stacked column chart, with Candidate in Axis and the three new measures in Value. 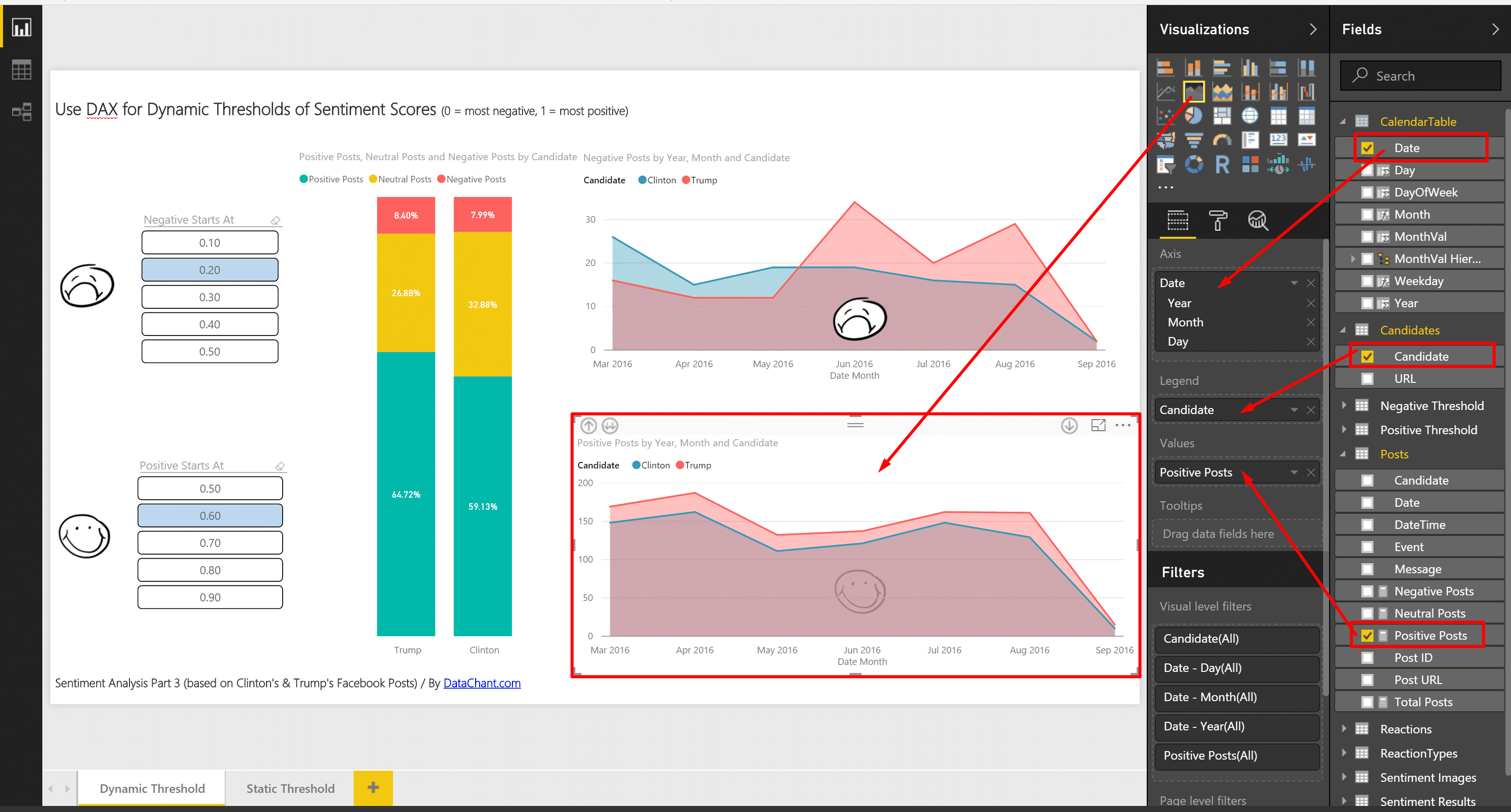 That’s it. I am sure you will find both the static and dynamic approaches useful in many scenarios where you need to translate numerical values into textual buckets.

I hope you enjoyed this tutorial.